Retrofit Your Lamps and Save the Night (and Money too)

Back in January I posted that Lowe's home improvement stores were now selling dark-sky friendly lighting. I took some before & after pics from a house that just had its lighting upgraded. Let's take a look at what a difference it can make.

In the pics above the old light is on the left. Notice that it sends light up, out, over and down. Even though the glass on it is frosted, it contributes greatly to light pollution in the forms of sky glow, glare, and light trespass. On the right is the new light fixture from Lowe's. Notice the sharp line of shadow that runs horizontally on the wall. This light fixture puts all of its light downward and not skyward. That same sharp cutoff keeps the light from spilling into the neighbor's yard, so light trespass is stopped. It also means that the lamp is not a source of glare like the old one was. 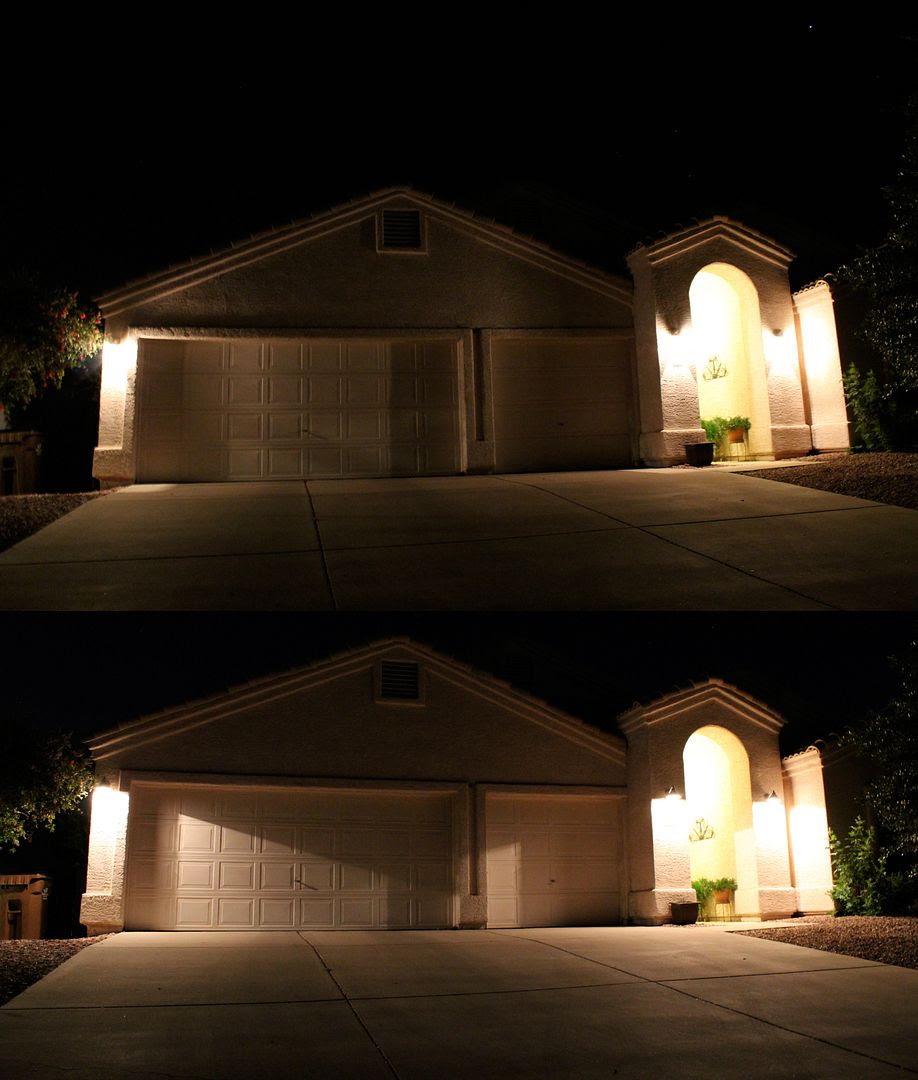 Here's a wider shot showing the whole front of the house. That's the before shot above and the after at bottom. Three lamps were retrofitted here (Note that there is a decorative fixture under roof in the home's entry way that was not changed for these pics). Notice that in the after shot that there is more light on the ground where it is actually needed. This is because the light produced by the bulbs isn't going skyward, out across the street or into a neighbor's yard. Yes, a dark-sky friendly light actually gives you more light down on the ground.

In both the before and after shots there were 60-watt incandescent bulbs in the fixtures. Because the new light fixtures put more light where it is needed it is possible to use light sources that produces less total light.

Here's an example that shows off what can be done.

On the left is the old, bad fixture with the 60-watt incandescent bulb. On the right is the new light fixture and a new lamp. Inside is a 3-watt LED lamp. What are the two things that matter here with regard to the light source? The power that the lamp uses and the amount of light it puts out. The incandescent was using 60-watts of power and the new LED just 3-watts. That's a 95% reduction in energy used! With an energy reduction like this, the new light sources will pay for the new lamps over time.

What about the total amount of light? The 60-watt bulb puts out about 800 lumens of light while this particular LED puts out just 83 lumens. That's quite a reduction. Some people will feel that this would be dropping the intensity of the light more than they are comfortable doing, but the old 60-watt bulb was dramatically overlighting the area, even before the lamps were replaced.

This dramatically shows that when switching away from incandescent lighting to LED or fluorescent light sources it is important to pay attention to the total amount of lumens of light they produce. Making the switch will save energy, bu in most cases people are already using too much light, so it is possible to save even more. So, unless you feel that an area is too dark, it is advisable go for a lumen reduction for lighting (indoors or outside).

Imagine what a difference it would make it more homes made this conversion.

There's a wide-range of options when it comes to LED light sources. This particular one is an amber LED. It was chosen because it has less impact on the night sky and on the natural world. In some areas, such as near sea turtle nesting beaches, light sources such as these are of vital importance.

In case you were wondering, the same camera settings were used for all the shots here, except this one: 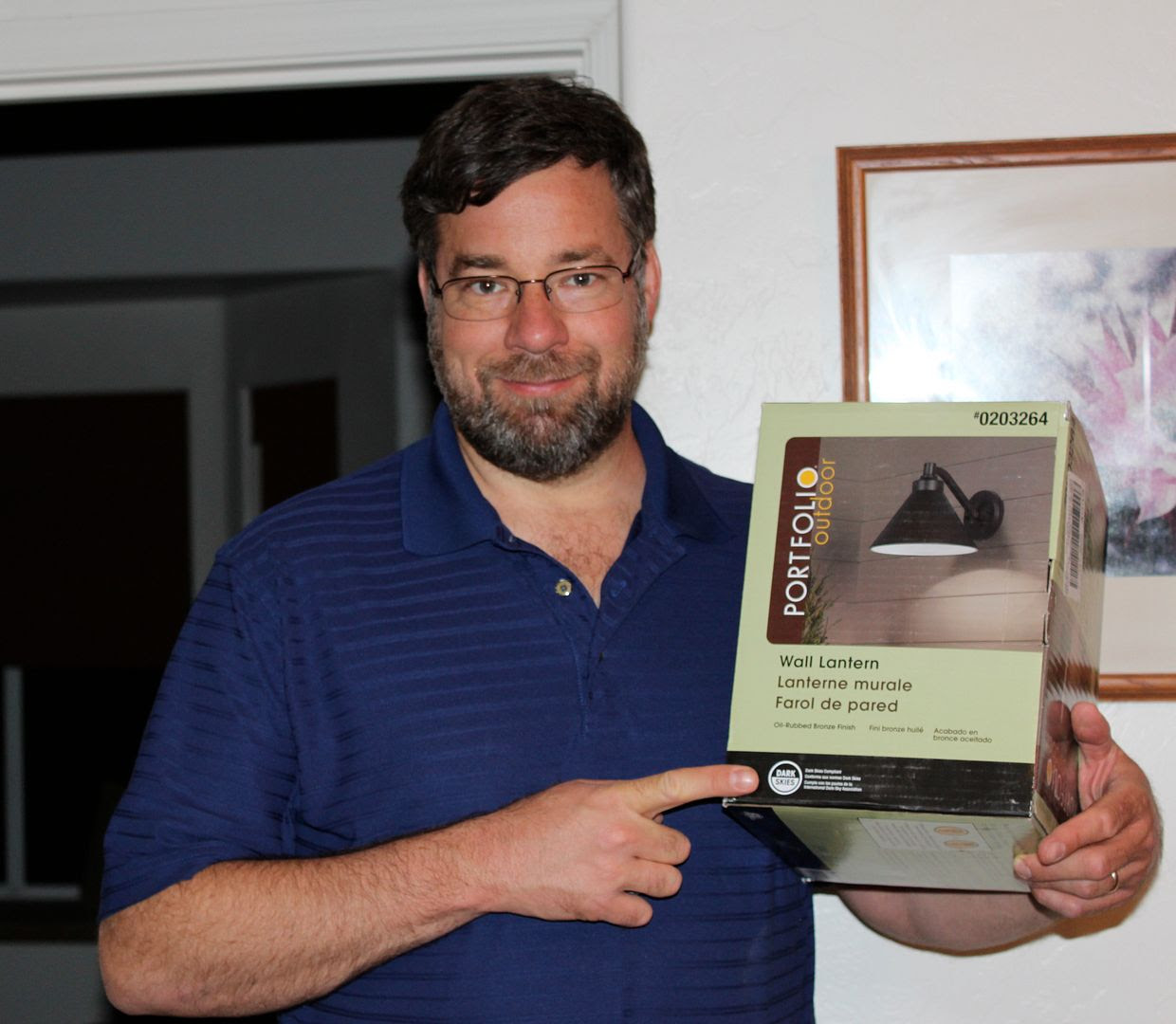 That's me holding the new light fixture from Lowe's. It's what they call the "Portfolio 7-in Oil-Rubbed Bronze Dark Sky Outdoor Wall Light." It retails for just under $30, but they have other options that are less expensive. The lamp, like others in their Good Neighbor / Dark Sky line have been approved by the International Dark-Sky Association (IDA). In the interest of full disclosure, I work for IDA but am blogging this on my own because that's how I roll.
Posted by W. Scott Kardel at 10:17 AM

Unstoppable: Harnessing Science to Change the World
by Bill Nye

The Orbital Perspective: Lessons in Seeing the Big Picture from a Journey of 71 Million Miles
by Ron Garan

Parallel Worlds : A Journey Through Creation, Higher Dimensions, and the Future of the Cosmos
by Michio Kaku

The Making of The Empire Strikes Back
by J.W. Rinzler